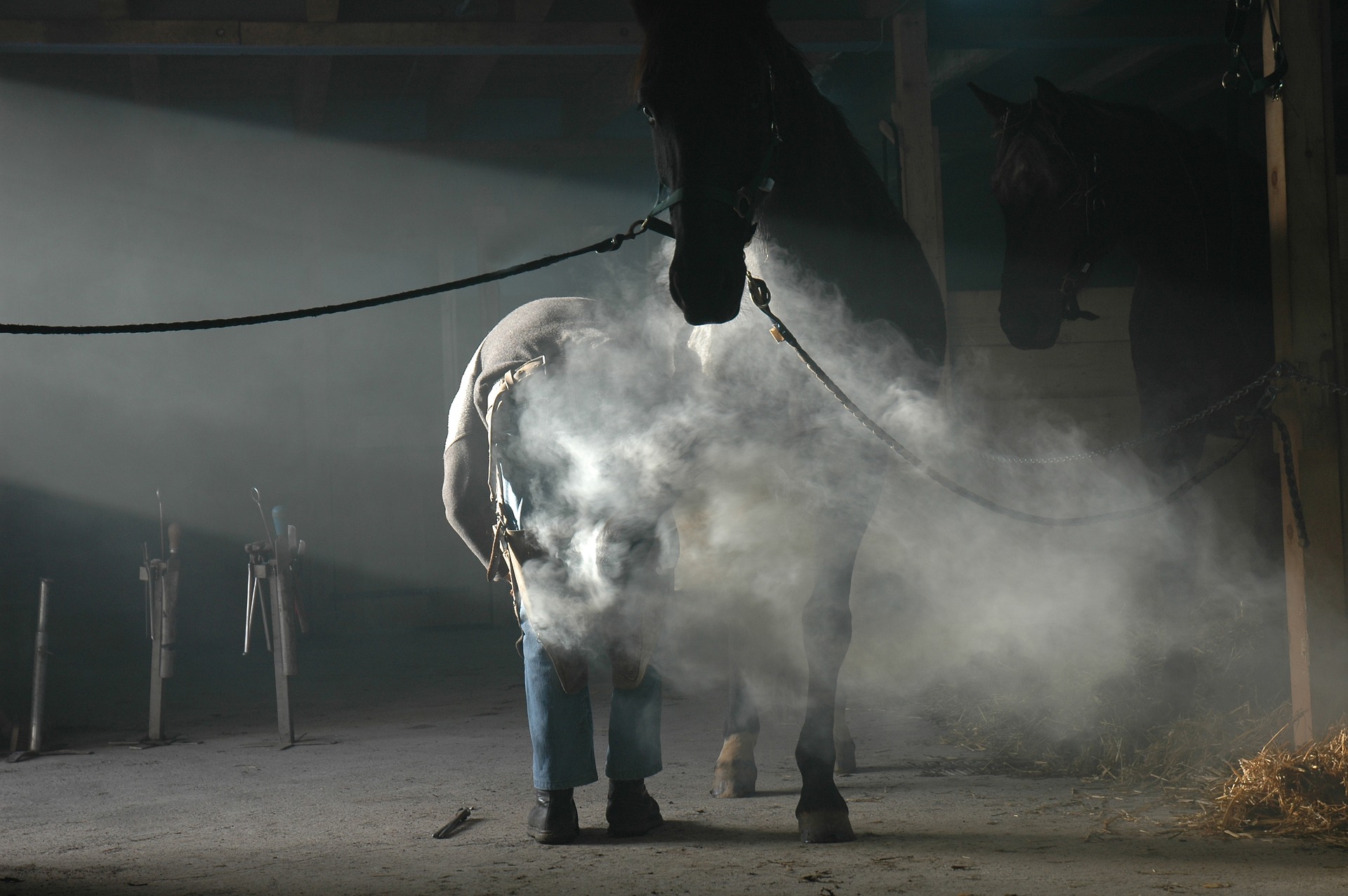 Ever heard of a farrier? No? If you know horses (yeah I mention horses quite a lot I know, you get used to it), then it’s a word that evokes either great reverence or great profanity. Cue most equestrians having a chuckle and most farriers feeling slighted (we love you we promise). Farriers are incredibly important when it comes to horse care and most equestrians would gladly give up a few teeth for a good one. They’re the guy who comes into the yard on a regular basis, leaning over for hours on end while he gives horses a very specialized pedicure.

Imagine spending most of your day bent over, supporting the weight of a horse’s leg, while you clip and file his hoof (hooves are made of rather tough stuff it should be noted), hammer said horse’s heavy metal shoes to the correct shape for that horse and then nail and clench them tight to that hoof and finish by filing some more. This is all hard enough on a willing and compliant recipient of such pedicures but a surprising amount of the time some horses take exception to this. So then the poor guy is dealing with 500kgs of power that’s fidgeting, biting, kicking out and altogether being a pest with the potential to otherwise crush or maim him while being patient with said beastie, on top of having to do a good job and not make any mistakes lest he causes that uncooperative animal to go lame. It’s tough work and incredibly hard on the body for a job that goes often unappreciated especially considering that it is work that horses can’t go without. Talk about challenging!

I’ve met a fair number of farriers in my life, have seen most of that number moving around a little gingerly but until yesterday had not previously had the delight of working on one. Francois booked to see me after a long day of slogging it under horses. His discomfort was immediately apparent and I tried to make quick work of getting him seated so we could discuss the nature of his body complaints. I could tell this guy was exhausted but the kind where you’re so used to being in that state that you don’t even notice. Like many hard working people Francois had left his work related body pains for so long that had become screams instead of aches. He stated a number of complaints and areas where he was having problems, the least surprising of which was lower back ache that was worse than usual. Then it was time for me to get to work and for him to finally get some much needed relief to these areas that take such a beating day after day.

Extra time and effort was taken over the entire lower back areas, working continually deeper into the tissues which were rather stubborn about releasing and loosening up. It’s always so gratifying to me to in real time feel the relief as the tension and pain leaves my clients’ bodies. I feel so blessed being able to encourage people’s bodies to let all that go so they can focus on their lives instead of their pain. All in all it was an average session though. Nothing I found was unexpected or unusual enough to stick out in my mind. The session came to a close and Francois saw me back to my car, all politeness and pleasantries expressed and I drove home. Another average day in the life of me. So why am I writing about this? It was only really the next day that made an impression on me.

I do like to follow up with my clients and ask them for feedback on how they are doing post session. It’s not often I am met with such enthusiasm and detail! Usually this conversation goes with me enquiring something along the line of “How are you feeling today?” and the usual responses are fairly generic too such as “Good thanks”, “Better thank you”, “I slept really well” or any variety thereof. I usually don’t get more than a line or two at most. Not this time! Francois it seems has some seriously good body awareness, which frankly I found fascinating after the impression I got of seemingly long ignored exhaustion and body pains. I received a voice note from him detailing all that had happened since our session ended and all that was different and felt better. His body had responded so well to the treatment, he seemed surprised how much. He was able to work for longer before any discomfort set in and it had made all the difference. It was great and I was really pleased. His message left me smiling and totally made my day and this session now stands out for me as a great example of the power of massage and why I decided to do this work – to make a positive difference to people’s lives. For this person the joy of freedom from pain was totally glorious and that right there is what it’s all about.

Hands on Healing
All Rights Reserved